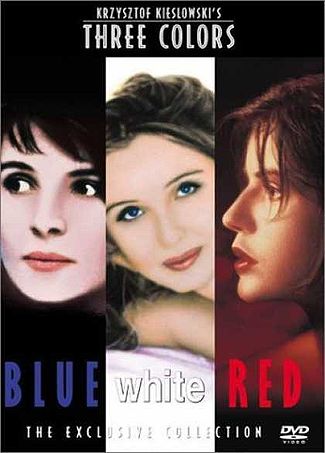 Critically-acclaimed trilogy of French/Polish drama films directed by Krzysztof Kieślowski (also the director of The Decalogue, Blind Chance, and The Double Life of Veronique), and released in relatively close proximity to each other in 1993–94.

They are named after the three colors in the French flag: blue, white and red, and each has a corresponding color motif. They are each loosely based on one of the three French revolutionary principles of liberty, equality and fraternity. The trilogy are also interpreted respectively as an anti-tragedy, an anti-comedy, and an anti-romance.

Trzy kolory. Niebieski (English: Three Colors: Blue, French: Trois Couleurs: Bleu) (1993): Based on the principle of liberty. After a famous composer dies in a car crash, his wife Julie (Juliette Binoche) retreats into seclusion, but various contacts and issues in the outside world force her to emerge again.

Trzy kolory. Biały (English: Three Colors: White, French: Trois Couleurs: Blanc) (1994): Based on the principle of equality. After the beloved (French) wife (Julie Delpy) of Polish hairdresser Karol Karol (Zbigniew Zamachowski) divorces him thus rendering him destitute, he makes it back to Poland, manages to make it big by blackmailing his bosses and then schemes to extract revenge on his wife.