Film / The Double Life of Veronique 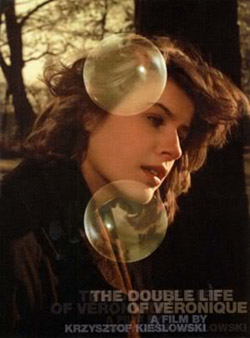 "This is one of the most beautiful films I've seen... This whole film is a hug, the kind you share with a very good friend when you are in sympathy about something that is very important."
— Roger Ebert
Advertisement:

It tells the story of two women called Weronika and Véronique, from Poland and France respectively. Both women look exactly the same, share a lot of personality traits and seem to be aware of each other’s existence. However, they never interact with each other, except for one brief moment from a distance.

Weronika (Irène Jacob) is a young Polish woman, a singer in a choir. She travels to Krakow by train, looking for a job. While there she sees a French tour bus and spots a young woman who is her spitting image. The woman on the bus does not notice her. Weronika auditions and lands the job she wanted, featured singer with a Krakow orchestra—but tragedy strikes.

Cut to a young French woman, Veronique (also Irène Jacob). Veronique finds herself feeling sad one day, for no particular reason. She begins to feel as if someone has gone out of her life, but she doesn't know who it might be. She falls in love with Alexandre, a puppeteer. He sees a picture she took on her recent vacation to Poland, a shot of a woman who looks just like her.