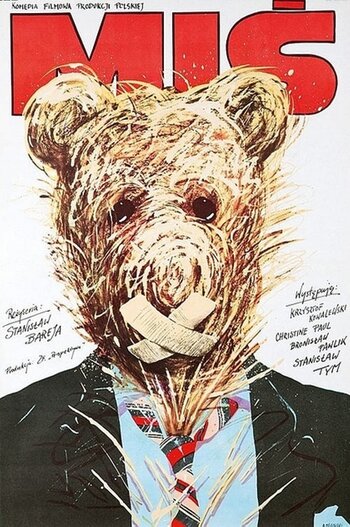 Miś, the 1981 movie by Stanisław Bareja that every Pole has seen (a lot...), and quoted (a whole lot) but can't explain to foreigners because it's just too much Mind Screw and culture-specific stuff.

Ryszard "Miś" Ochucki is a manager of a sports club and a swindler on the side - his current embezzlement plan includes building a giant straw bear (Makes Just as Much Sense in Context). While at it, he learns his ex-wife, Irena, is planning to remarry and to withdraw the money from a foreign bank account they had together — the Divorce Assets Conflict going unresolved, it becomes the matter of who gets there first and takes it all.

So, Ochucki tries to go abroad with a sports team from his club, but at the border it turns out his passport has been torn. So he can't. And passports are, in his day and age, Serious Business, so he won't be able to just get a new one in time.

All is lost? You bet it isn't. Ochucki just needs a passport with his picture. It doesn't need to be in his name...

Although it features a giant straw bear, it should not be confused with the toy of the same name.