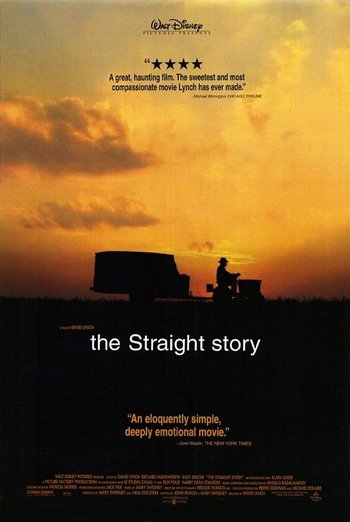 A heartwarming, uplifting film for the whole family from the man who brought us Eraserhead and Blue Velvet...
Advertisement:

The Straight Story is a 1999 film from Walt Disney Pictures and directed by David Lynch, starring Richard Farnsworth (in his final film role) in the eponymous role along with Sissy Spacek and Harry Dean Stanton.

The film is based on the true story of a man named Alvin Straight. Straight, an elderly World War II and Korean War veteran living with his brain-damaged daughter Rose, hears that his estranged brother Lyle has had a stroke. Disappointed that he's never made up for the incident that (he was drunk at the time) led to their split, he decides to reconcile with Lyle before one of them dies.

Unfortunately, Straight is almost blind and half paralyzed, which leaves him unable to walk long distances or get a legal driver's license. Unwilling to let life end this way, he hitches a trailer to his riding lawnmower and proceeds to tackle the 240 mile journey from Laurens, Iowa to Mount Zion, Wisconsin so that he may make amends with his sick brother.

David Lynch directs the sweetest, gentlest movie you could imagine.

Not to be confused with Straight Story, a Greek movie about straight couples in a gay world.