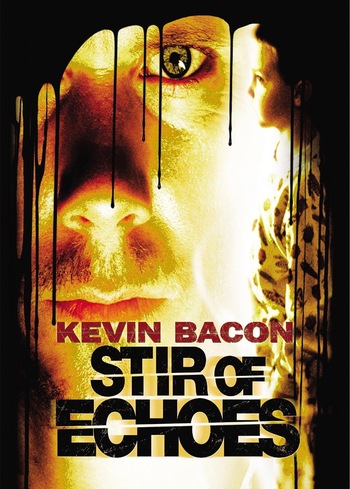 Stir of Echoes is a 1999 thriller written and directed by David Koepp, starring Mr. Six Degrees himself, Kevin Bacon. It's The Film of the Book of the 1958 Richard Matheson novel, though not a very strict adaptation of it.

At a party Tom Witzky (Bacon) scoffs at his sister-in-law Lisa's (Illeana Douglas) belief in psychic abilities and the paranormal. She hypnotizes him as a joke, and plants a post-hypnotic suggestion that he be more "open" to everything, which causes his latent psychic powers to stop being latent. Even stranger and scarier, his son Jake's psychic abilities, which aren't latent, begin picking up on weird things in and around the house, much to the dismay of his wife Maggie (Kathryn Erbe).

Eventually Tom and Jake realize the presence they sense is a ghost of a girl (Jennifer Morrison) who was murdered in the house some time ago.

It had a Made-for-TV Sequel, Stir of Echoes: The Homecoming starring Rob Lowe, which appeared on Sci Fi Channel, so you know what to expect.