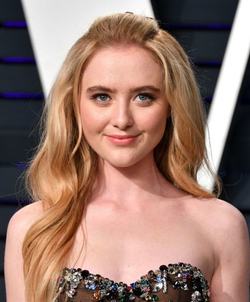 Kathryn Love Newton (born February 8, 1997 in Orlando, Florida) is an American actress. She started out as a child star on All My Children and Gary Unmarried before appearing in the fourth Paranormal Activity film. Since then, she has become known for starring as Abigail on Big Little Lies and as Lucy in Pokémon Detective Pikachu. She is also known for portraying the older versions of Claire Novak in The CW dark fantasy series Supernatural and Joanie Clark in the AMC period drama series Halt and Catch Fire. In 2019, she played the lead role of Allie on The Society.

Her career provides examples of: