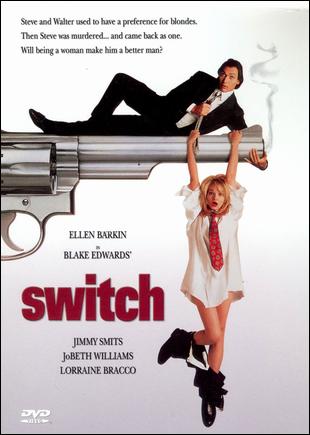 A 1991 comedy written and directed by Blake Edwards.

Steve Brooks (Perry King), a promiscuous and sexist man, is murdered by his ex-lovers. He is offered acceptance into Heaven only if he finds a woman who truly likes him and is sent back among the living in order to accomplish this. However, the Devil (Bruce Payne) suggests a complication to teach Steve a lesson and prevent him from easily seducing a woman, and turns him into a beautiful blonde woman (Ellen Barkin).

The film's trailer is infamous for the bit where the film's title is said, followed by a different voice quickly adding "Jimmy Smits" without even a "starring" or "featuring" beforehand.

Not to be confused with The Switch.