Things Are More Effective in Hollywood 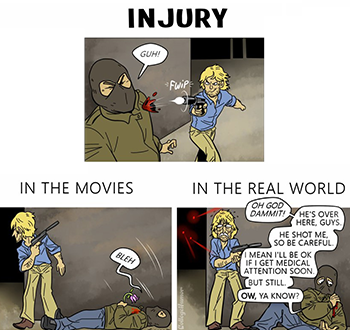 In television, they'd have you believe that many things are extremely effective at their purpose, when in reality, they can only do it some of the time or only partially. Partly, this is because the name of the product portrays its usefulness much more than it actually is. For example, "bulletproof" objects which are usually simply bullet resistant. The other part is because if they were portrayed realistically it would likely ruin the story. If "bulletproof" things weren't actually bulletproof and the protagonist got shot, either that's the end of your movie or the next 40 minutes would be spent at the hospital watching them recover. Some of the most notable ones are:

Compare As Lethal as It Needs to Be. See also Muggles Do It Better, which is when ordinary weapons are portrayed as far more effective than the Phlebotinum used in the show.