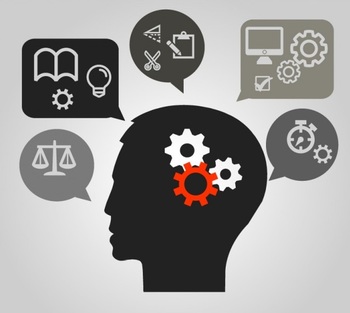 The other type of gearhead.
Lefou, I'm afraid I've been thinking
A dangerous pastime, I know ...
Now the wheels in my head have been turning ...
And right now I'm evolving a plan
— "Gaston (Reprise)," Beauty and the Beast
Advertisement:

Sometimes, people have to think long and hard about something, whether it be a common problem or a moral dilemma. When they do, there is a chance that a set of wheels (usually gears) will appear in their heads. This can be attributed to the comparison between the human brain and a machine at work, such as a clock. It can also be a sign of a character's intelligence, as they are likely to be thinking almost constantly. Alternatively, a very small and/or poorly functioning set of gears could be depicted to indicate stupidity.

This isn't always a visual trope, as there are verbal expressions that carry this image.

Compare Idea Bulb, where a light bulb appears after the character has finished thinking.