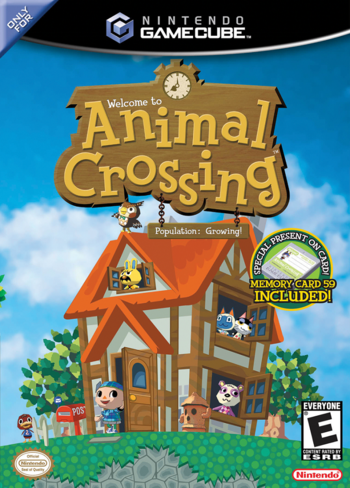 Population: Growing!
Animal Crossing is a Life Simulation Game originally released in Spring of 2001 as the final first-party title for the Nintendo 64, under the name Doubutsu no Mori ("Animal Forest"). While modest in intent and definitely sparse in content, it was popular enough to receive an Updated Re-release on the Nintendo GameCube with a bunch of added content, characters, and text as Doubutsu no Mori+ in winter 2001. This version, albeit heavily modified, is what would be released internationally as Animal Crossing in 2002 in North America, 2003 in Australia, and 2004 in the European Union.

Based on the creator's own experiences with moving away from his hometown for professional purposes, Animal Crossing is a game where you play as a Super-Deformed human avatar living in a village full of Funny Animals. You interact with your fellow villagers, befriending them and doing Fetch Quests. You can also customize your avatar's house, change their clothes, and get a tan.

The English release of the game is notable for being a massive overhaul from the Japanese releases, which were based heavily in Japanese culture, right down to featuring a number of obstinately Japan-centric elements such as holidays and paraphernalia. For the English release, most of this was either replaced with an American equivalent, exoticized, or removed altogether, with an end goal of creating an experience for English speakers that was culturally analogous to what Japanese speakers encountered in the Japanese versions. Nintendo of Japan were highly impressed with the localization, incorporating its changes and further new content into an Updated Re-release as Doubutsu no Mori e+ in the summer of 2003; many of these added features would gradually be carried over to later installments, through which they would make their belated international debuts. Unfortunately, this is where the story for the original incarnation of Animal Crossing ends, with Doubutsu no Mori e+ remaining Japanese-exclusive to this day; however, the three versions altogether were considerable successes for Nintendo, who released a Nintendo DS sequel, Animal Crossing: Wild World, in 2005, setting the stage for Animal Crossing to become an increasingly big franchise for Nintendo over the course of nearly 20 years.