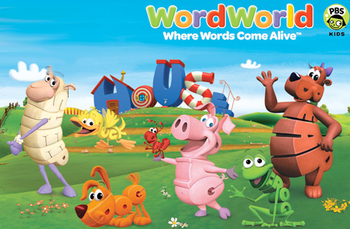 Welcome to our world!
Advertisement:

WordWorld is a very odd preschool show that centers on Funny Animals and a non-anthro dog—who are all living words. They can build new things out of letters. If you need a house, just build one out of the appropriate letters.

The series premiered on PBS on September 3, 2007, and was produced by WTTW Chicago. The series received critical acclaim and awards. The show ended on January 24, 2011 and only produced three seasons, but it could still be seen in reruns on PBS Kids affiliates, particularly the 24/7 kids channel, until October 2022. Additionally, as of 2022, it is still available on the PBSKids streaming app and even sometimes featured.