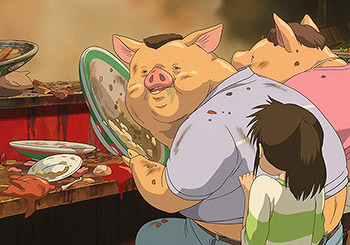 Pigs are more omnivorous than most domestic animals, and like most meat livestock have been bred to put on weight quickly. That's why in fiction pigs are often portrayed as gluttonous beasts whose favorite thing in life is eating — eating a lot, eating all the time, eating anything that moves and that doesn't. This may result in the pig character becoming obese, but not necessarily; quite often they're just a bit pudgy.

If a pig is anthropomorphic, expect them to eat a lot of junk food, in a poignant commentary on the low quality of mass-produced food, or on modern consumer society, or something like that. In a crossover with Messy Pig, such anthropomorphic swine usually have Jabba Table Manners, burping, snorting and farting all the time.

Sometimes, in a twist on this trope's original meaning, a pig character (usually also anthropomorphic) is portrayed as greedy, craving money and riches instead of swill.

Subtrope to Big Eater and, in some cases, Extreme Omnivore or Villainous Glutton (if the character is a villain). Supertrope to Fed to Pigs, where the pigs' gluttonous nature is used as a means to dispose of bodies. For other common porcine Animal Stereotypes, see Messy Pig, Perverted Pig, and Brainy Pig. For a trope related to boars, see Full-Boar Action.,

Interestingly, in Judaism pigs are actually a symbol of hypocrisy: they are said in The Talmud to be the only animals with cloven hooves that don't ruminatenote Not true: okapis fit this description as well; but they hadn't been discovered when the Talmud was written, so a pig displays its hooves and claim to be pure while not sonote Mammals need to have cloven hooves and ruminate to be kosher; you can read more about it here. However, due to a more global version of Eagleland Osmosis, this trope is very well-known among Jews, to the point that khazirútnote חזירות (lit. 'swinery') is essentially Modern Hebrew for 'avarice'.