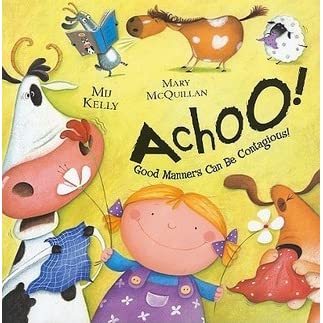 Achoo! is a kids' book by Mij Kelly, using the Suzy-Sue character from Have You Seen My Potty? and A Bed of Your Own!.

In it, Suzy-Sue sneezes without covering her mouth. The animals take offence at this and teach her how to politely sneeze, along with other etiquette tips.

They also bathe the dog, teach the pigs to avert Gluttonous Pig and Messy Pig, and teach the cats not to fight. This causes a conflict, however, as the cats were only playing tug-of-war and the rest don't like how the cow spoke to them.