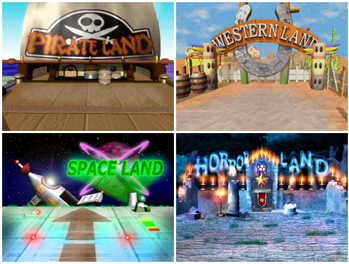 What is this, an amusement park?
Advertisement:

A very, very popular naming scheme for many, many things. Simply take an attribute and append "-land" or "-world" to it. It's the easiest way to come up with the name of a country (sometimes to the point of parody). Amusement Parks in particular are almost always guaranteed to use this name scheme, if only to riff on Disneyland and Walt Disney World.

Similar to Premiseville. Compare Countrystan, where -stan is the Persian equivalent of -land. The Egopolis has a good chance of employing this, especially if the ruler is a Card-Carrying Villain.