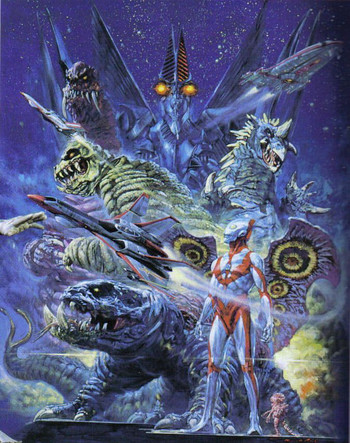 A spark from the galaxy, with a speed of the meteor...
Ultraman: The Ultimate Hero (aka Ultraman Powered in Japan) is a 13-Episode miniseries and the third (and final) International Coproduction in the Ultra Series, this time between Tsuburaya Productions and Major Havoc Entertainment (later renamed Steppin Stone Entertainment).
Advertisement:

The members of WINR (pronounced "Winner") respond when members of the Baltan race attack Earth, but the Baltans are only fended off when a gigantic alien, Ultraman Powered, joins with WINR member Kenichi Kai and gives him the power to metamorphose into Ultraman in times of danger. After the initial battle, Ultraman declares that the Baltans were not completely defeated and that he will remain on Earth to continue the fight.

Despite being produced in the US, Ultraman: The Ultimate Hero never actually saw release there. Instead, the entire series was released in Japan as both Direct-to-Video in 1993 and airing on TV in 1995.

The show has examples of the following tropes:

Ultraman's US-produced series uses an instrumental version of the series' theme for its opening.

Ultraman's US-produced series uses an instrumental version of the series' theme for its opening.