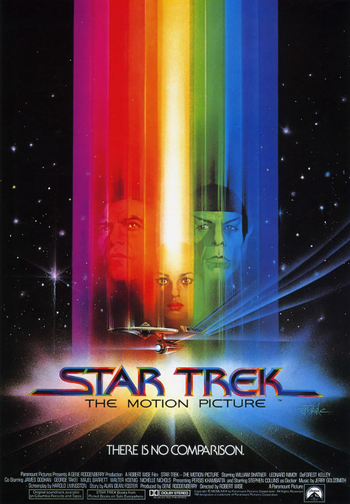 "The human adventure is just beginning."
Scotty: The crew hasn't had near enough transition time with all the new equipment. And the engines, they're not even tested at warp power. And an untried captain...
Kirk: Two and a half years as Chief of Starfleet Operations may have made me a little stale, but I wouldn't consider myself untried... They gave her back to me, Scotty.
Scotty: Gave her back, sir? I doubt it was that easy with Nogura.
Kirk: *in Scottish accent* Ye're right.
Advertisement:

The one that gave Klingons their trademark forehead ridges.

Star Trek: The Motion Picture is the first movie in the Star Trek film series, released in 1979.

Eight years after the Cancellation of the original Star Trek series, which had gone on to be Vindicated by Reruns, the blockbuster successes of Star Wars and Close Encounters of the Third Kind convinced Paramount Pictures to follow up by green-lighting a Sequel Series for the franchise, Star Trek: Phase II, to serve as a backbone of a new fourth major television network, with Trek creator Gene Roddenberry running the new show. However, within a couple of years, and after substantial pre-production had already gone forward on the new series, Paramount ultimately vetoed the idea of starting a new network, fearing major cash drainage.

However, Paramount decided to use the work already put into Phase II to finally make The Movie (Roddenberry and Paramount had tried to get a Trek movie off the ground four years earlier, which fizzled), with noted director Robert Wise (director of The Day the Earth Stood Still (1951), West Side Story and The Sound of Music) at the helm.

As a side note, the general story is nearly identical to the Original Series episode "The Changeling,"note  earning it the fan nickname, "Where Nomad Has Gone Before" with elements from "Obsession" and the Animated Series episode "One of Our Planets Is Missing"—and in fact the movie's story was intended to be the pilot of the abandoned Phase II.

The plot sounds simple enough. An unstoppable entity calling itself V'ger is heading towards Earth, destroying all in its path, and the Enterprise is sent out to investigate. The story was originally written to be an hour and a half pilot to Phase II (two hours with commercials), stretched to 2½ hours, most of which involved the bridge crew staring at special effects in awe. This led to the film to receiving several Fan Nicknames based on its quite slow pacing, such as "The Slow Motion Picture" and "The Motionless Picture". Wise's declared intent at the time was to create a 2001: A Space Odyssey for that era, and the equally slow-moving Close Encounters of the Third Kind was a blockbuster. This film's criticized slow pacing was partly the reason towards making an Actionized, Surprisingly Improved Sequel, Star Trek II: The Wrath of Khan.

The novelization of the film is noteworthy for two reasons: it is the only prose Star Trek fiction ever written by series creator Gene Roddenberry, and it contains a footnote explicitly addressing rumors that Kirk and Spock were lovers (it may or may not have cleared that up).

The movie is also noteworthy for its score, composed by Jerry Goldsmith, who would go on to score four more Trek theatrical films (he had been Roddenberry's first choice to score the original Trek first pilot, "The Cage", but was unavailable at the time). Goldsmith's main theme would be re-purposed as the theme for Star Trek: The Next Generation, and his Klingon themes would be adapted in other Trek film scores and in later Star Trek series.

In 2001, a Director's Cut was released on DVD. It has been trimmed to be slightly faster-paced and includes improved special effects, including a shot that shows the entirety of V'ger. It also revealed that the original film was more of a workprint and Wise was not allowed to trim it to a more reasonable length because executives feared such information would ruin the film's reputation ahead of time, and Wise was so slow at filming the movie that when the prints were delivered for the movie's premiere, they were still wet from last-minute editing. In 2022, a 4K remastered version of the Director's Cut was released on streaming, Blu-ray and a limited theatrical release.

Tropes seen in the novelization of Star Trek: The Motion Picture include: