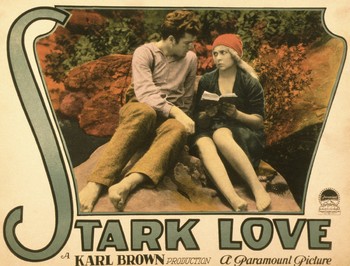 Stark Love is a 1927 film directed by Karl Brown.

It is set in the hills of Appalachia. The mountains of the Carolinas are in this telling inhabited by "an isolated and primitive people," who live in a cruel patriarchy where "MAN IS THE ABSOLUTE RULER—WOMAN IS THE WORKING SLAVE." The men sit around drinking all day and oppressing their women, who are more or less sex slaves.

One exception to this grim portrait is Rob Warwick, a thoughtful young man who seems to be the only person in his village who knows how to read. He tries to help his mother, who is literally being worked to death, and for this he is mocked by his brutish father James. Rob takes a liking to a neighbor girl, Barbara, and together they dream of escaping the valley, making it to the city, and getting educations. Rob actually leaves the valley, sells his horse in town, and gets back with the money to send Barbara to school—but in the meantime his mother has died. His father, needing a new sex slave, has set his sights on Barbara.

Filmed on location in the Appalachian Mountains of North Carolina, with a cast of local people that were recruited for the movie. Director Brown, who had a very, very low opinion of the Appalachians and of the people who lived there, deliberately shot out of sequence to prevent his actors from catching on to the extremely negative stereotypes he was putting on film. None of the actors in Stark Love ever appeared in another movie, although 16-year-old Helen Mundy (Barbara) was so excellent in her part that she was signed by Paramount to a contract, before changing her mind and going back home. Forrest James (Rob) went on with his life, and a few years later fathered Forrest Jr., better known as two-time Alabama governor Fob James.