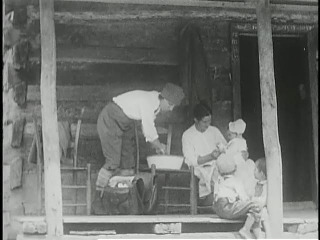 , an organization founded by Mary Carson Breckinridge in 1925 to provide medical care to the isolated and desperately poor rural mountain communities of Appalachia. The nurses of the Frontier Health Service range all over the mountains, riding for miles and miles on muddy dirt roads to tend to their patients, in all kinds of weather, fording rivers on horesback, braving rain and snow.

The film is divided into five parts. Nurses go about their rounds, delivering babies, inoculating children at a schoolhouse, tending to the sick. One segment shows the nurse at a child hospital taking in two sick babies whose widowed father can't care for them. The last segment shows a dramatic race to save a man who was shot off his horse by an enemy.

Mary Marvin Breckinridge, who had no film experience before she was recruited to make this film by her cousin, was a one-woman crew, not only directing but shooting the film as well as editing. It was shot as a silent film with Breckinridge toting around a hand-cranked camera herself. The result is one of the best documentary films of the era, one that ranks along with other early documentaries such as Nanook of the North and Chang.

Compare Stark Love, a scripted drama made four years before this film that was also shot on location in the Appalachians as a presentation of mountain life.