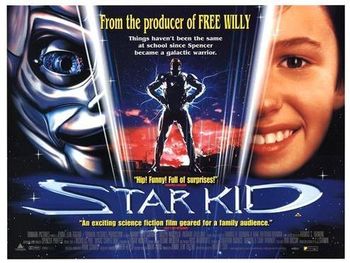 Star Kid is a 1997note It was first released in Singapore on November 13, 1997; its American release was on January 16, 1998. indie sci-fi/family movie that revolves around the adventures of one Spencer Griffith (Joseph Mazzello), a normal kid who found an alien spacesuit lying in a crater in his hometown, crawled into it, and got stuck inside. Soon enough he finds himself speaking to an alien A.I., transforming into an advanced tech version of a Super Soldier, and having to save the Earth from Insectoid Aliens.

Unlike most kid heroes, Spencer never Jumped at the Call; he got shoved. Of course, that's not to say he won't have a little fun while he learns how to be a hero...

Not to be confused with the musical theatre production troupe Team StarKid.

The movie has many sci-fi–related tropes: