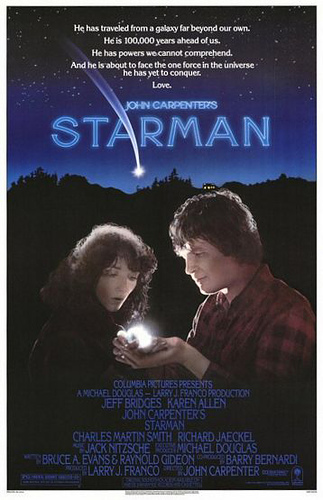 Mark Shermin: Have people from your world been here before?
Starman: Before. Yes, we are interested in your species.
Mark Shermin: You mean you're some kind of anthropologist? Is that what you're doing here? Just checking us out?
Starman: You are a strange species, not like any other... and you'd be surprised how many there are. Shall I tell you what I find beautiful about you?
Advertisement:

Starman arrives on Earth as a result of Earth having transmitted welcome messages to any alien life, and clones himself an environment suit — the naked form of Jenny Hayden's dead husband. Jenny is very freaked out by this, and at first only wants to get away from the freaky dead ringer for her dead husband. But she (eventually) agrees to take him to Winslow, Arizona, where he has his only chance to meet up with the other aliens and go home. Naturally, this leads to a long road trip (Starman has gotten dressed by this point) involving a lot of learning about life on Earth, bonding, and ultimately romance.

As usual, the military has it in for friendly aliens. They are led by the hard-as-nails George Fox (Richard Jaeckel) who wants to dissect or kill Starman. His obligatory Morality Pet Mark Shermin (Charles Martin Smith) vainly attempts to convince him to do otherwise.

The movie was followed by a Walking the Earth television series starring Robert Hays of Airplane! fame.