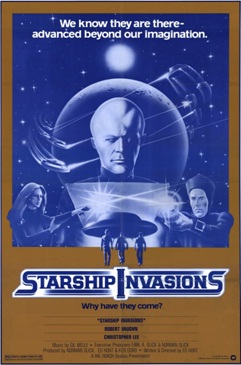 Starship Invasions is a Canadian science fiction movie from 1977, written, directed and produced by Ed Hunt. Originally intended to be called War of the Aliens, and later Alien Encounters, the title had to be changed to avoid confusion with other, significantly more famous alien-themed films that came out in the same year. Notable for drawing several elements from actual cases of alien encounter and having an ufologist as the main hero, UFO Lore: The Movie could have been just as appropriate as a title.

In this story, a group of rogue aliens known as the Legion of the Winged Serpent, from the Orion Constellation, lead by Captain Rameses (played by Christopher Lee), plan to colonize Earth fleeing from their home system, whose sun is about to explode. They plan to exterminate mankind in the process, using a device that affects the human mind from distance, causing people to become homicidal and suicidal. But first they must eliminate the Intergalactic League of Races, led by different aliens from Zeta Reticuli, which vow to protect less developed species. Meanwhile, the film follows the life of astronomer and UFO expert Prof. Allen Duncan (played by Robert Vaughn), who is shocked to find that his work may be alienating him (no pun intended) from his friends and family.

It is interesting to note that all alien characters here communicate solely by telepathy, meaning that Chistopher Lee and company never actually open their mouths the entire film, but we hear their voices nonetheless.