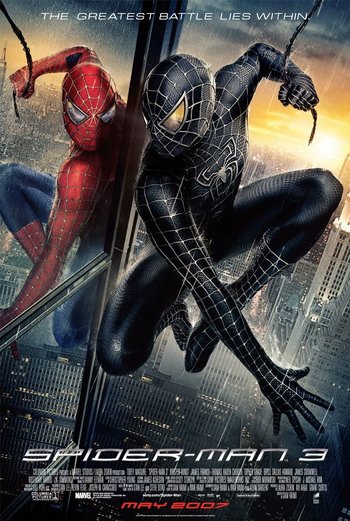 How long can any man fight the darkness...
before he finds it in himself?
Mary Jane: Who are you?
Peter: ...I don't know.
Advertisement:

Spider-Man 3 is the final film in the original Spider-Man Trilogy, released on May 4, 2007. It is the third Spider-Man film overall, and the last one in this particular continuity.

Peter Parker, it seems, is finally living the life he wants — New York doesn't seem to be gunning for him, he's with the girl of his dreams, and he's managing to balance his normal life with the life of Spider-Man. But his overconfidence leads to tension with MJ when he begins flirting with Gwen Stacy (Bryce Dallas Howard); and Harry Osborn, having discovered that his best friend is Spider-Man, decides to take his father's Goblin serum and seek vengeance.

Meanwhile, escaped convict Flint Marko is turned into the shapeshifting Sandman (Thomas Haden Church) after entering a particle accelerator, and is revealed to have been involved with the same criminal who killed Peter's Uncle Ben. As well, a mysterious alien organism crashes to Earth and bonds with Peter, enhancing his powers but also influencing his behavior for the worse. When this symbiote is abandoned, it finds refuge in a rival, Eddie Brock, Jr. (Topher Grace), who becomes the maniac Venom.

A sequel was in development, but Creative Differences between Sony and Sam Raimi led to its cancellation. The franchise was rebooted as The Amazing Spider-Man Series, with Marc Webb in the director's chair and Andrew Garfield as Spider-Man.

Tobey Maguire and Thomas Haden Church return as Spider-Man and the Sandman in Spider-Man: No Way Home.

open/close all folders
A-H
I-Z
Advertisement:
"Whatever comes our way, whatever battle we have raging inside us, we always have a choice."
Feedback