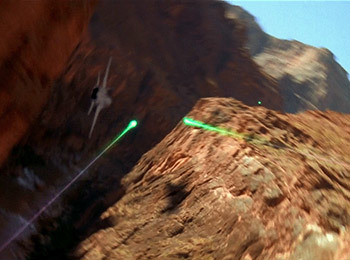 Sometimes, just fighting head to head in the air isn't enough. When a creator really wants to showcase the Ace Pilot's skills and keep the audience on the edge of their seats, he'll have the character lead the bad guys on a high speed chase through a very narrow area.

As the name might suggest, these usually occur in canyons, although Asteroid Thickets are the go-to replacement for Science Fiction. Modern settings may substitute skyscrapers for the canyon walls, as well. Caves or tunnels can also be substituted. Note that if the pursuers crash before entering the canyon/asteroid thicket/alley/tunnel, it's just Try and Follow, not this trope.

Expect to see lots of fast pans and quick camera changes, as well as tense music and close calls. This also has the benefit of missed shots from the pursuer striking the surroundings to showcase how dangerous they really are, lending more urgency to the fight.

Sub-Trope of Try and Follow. Sister Trope of Airstrike Impossible. Often includes instances of a Wronski Feint, Belly-Scraping Flight, or Dodge by Braking.

Han Solo and the Millennium Falcon do this in The Empire Strikes Back during the famous asteroid chase scene. As Solo noted, "They'd be crazy to follow us."

Han Solo and the Millennium Falcon do this in The Empire Strikes Back during the famous asteroid chase scene. As Solo noted, "They'd be crazy to follow us."