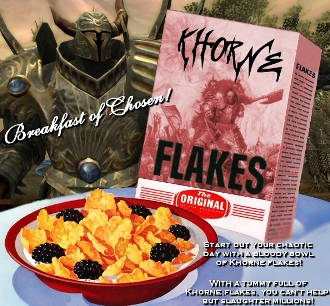 Remember, children: the only way to get the energy you need to spill the blood of Khorne's enemies and appease His will, is to start your day with a healthy and nutritious breakfast!
"I can taste your terror, child. All that anxiety and doubt... it's delicious."
— Infinite, Sonic Forces
Advertisement:

Evil doesn't just feel good, it also tastes good. Any Evil Overlord worth their cape will often describe their past evil deeds, current plot, or last kill with taste-related adjectives like "Delicious", "Sweet" or "Juicy", and their urge to do evil as a "Thirst", "Craving" or "Hunger".

The Seven Deadly Sins describe materialism and overindulging in earthly pleasures as sinful and wrong, and out of the seven deadlies Gluttony is one of the least glamorous. So when villains use taste to describe evil you just know there's something creepy and ugly about them, no matter how attractive they are. For much the same reasons Lust is why Evil Feels Good, and most villains like to describe their power in tactile and addictive terms like "Strong", "Smooth", and "Intoxicating". This might explain why some villains get Drunk on the Dark Side.

Extra points if they happen to be a cannibal, Serial Killer, vampire, werewolf, zombie, alien, or Emotion Eater. (Or all of them...) Although, there have been times when someone - or something - taking this Trope too literally, they find that Evil often doesn't taste very good at all. (In fact, some evil creatures taste downright awful.)

See also: Exotic Entree, Finger-Lickin' Evil, Lecherous Licking, You Taste Delicious, Horror Hunger, Licking the Blade and A Glass of Chianti. Contrast Being Evil Sucks. Combine with Delicious Distraction for humorous (or horrifying) results. (Usually) not to be confused with Villainous Glutton or I'm a Humanitarian.