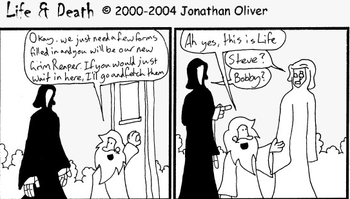 between the two: God: "Steve?";Death: "Yeah, my parents were modern thinkers."
Advertisement:

Life And Death is a webcomic by Jonathan Oliver about the personifications of Life (Bobby) & Death (Steve). The comic can be found here

It is also unrelated to the 1988 medical video game.

The link at the top will now direct you to the comic's Smack Jeeves page the new Drunkduck site.