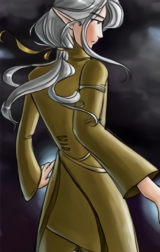 is a long-running comedic fantasy webcomic drawn and written by Colby Purcell. The story is a humorous take on the fantasy genre, focusing on the off the wall adventures of Sangwine, an exiled elven prince, and his somewhat dysfunctional group of companions on a quest to free the kingdom of Schloeffelonia from Sangwine's evil brother - Fang, Overlord of Darkness.

The comic began as a light-hearted comedy based story but eventually developed to have a more dramatic and plot-driven storyline, with the occasional throw-back to earlier wacky-style humour.

LinT was completed in January 2010. Purcell has since launchednote and finished a new comic, Pygmalion in Space

, as well as the aptly named sequel to LinT, Lintier