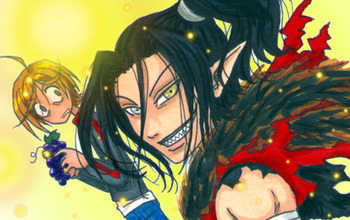 Originally a novel by the same name, the sisterly duo that comprises Avian Skies (the elder, Miko, an artist and the younger, Mirrasae, the writer) combined their talents to transform the story into a webcomic.

Jason "Key" Sterling is a liar, and he knows that liars don't go to Paradise. So when he's pushed into a puddle and wakes up in a fantastical world called just that, he knows there's a catch. This Paradise is hardly heavenly.

Key wakes up in a magical world where everything is filled with teeth and everyone wants to kill/enslave/use/intoxicate him. Despite this, his job is to save this world as the prophesied "Vendaeva". The seer that's supposed to guide him on his quest is a ditz, the leader of the clan that captures Key is a violent megalomaniac, and his closest "friend" thus far seems to only be interested in Key as a bargaining chip.

At least the grapes are good, yeah?