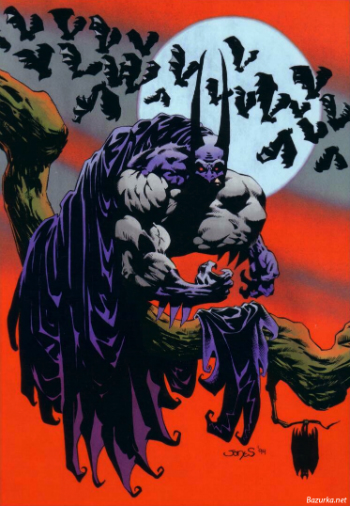 An Elseworld trilogy that involves Batman becoming a vampire. There are three parts to it:

A bunch of deaths are occurring in Gotham where the victims are found drained of blood with their throats slashed. As it turns out, the slashes are to hide the puncture wounds from vampires. Between his time investigating, Batman has dreams of a woman appearing to him as mist and then materializing. As it turns out, she is a vampire named Tanya (later changed to half vampire) that has spent a good while turning other vamps away from real blood and towards fighting Dracula. She visits Batman in the night and secretly bites him, infecting him with the vampire virus without actually drinking from him, to give him the strength to defeat Dracula, and she later sacrifices herself to destroy Dracula's horde by drawing them into the batcave as Wayne Manor is destroyed to rain sunlight into the cave. Batman faces Dracula and defeats him, but at the cost of the last of his humanity as Dracula bites and drains him in the process.

Batman, with his new powers, continues to fight for Gotham. However, he begins to feel bloodlust and struggles with refraining from drinking anyone's blood. Cue The Joker who steps in to boss Dracula's remaining mooks around. He begins a spree of killing Gotham's wealthier criminals and taking their belongings. Selina Kyle makes an appearance as a normal person, but is bitten and becomes a werecat. She meets Batman and provides her company, which curbs his bloodlust. In a later fight with the Joker, she is killed, infuriating Batman. He succumbs to his bloodlust and sucks the Joker dry. Horrified by what he has done, Batman orders Gordon and Alfred to stake him.

Without its Dark Knight, Gotham has fallen prey to its villains. Fearing what may become and convincing himself that his master cannot be evil, Alfred removes the stake from Batman, which, since he wasn't beheaded, allows for him to be revived. Now a vicious monster, however, Batman takes to the skies, killing all of his rogues. He then enters Arkham and kills every inmate. Gordon and Alfred decide to team up with Two-Face and Killer Croc to stop Batman.

Also apparently set in the Red Rain Verse, but not necessarily canon to the original trilogy, are "Red Rain: Blood Lust" in DC Infinite Halloween Special, in which Batman kills the Graysons, and Countdown Presents: The Search for Ray Palmer: Red Rain, in which the Challengers of Beyond meet Dick Grayson, Vampire Hunter, only for Batman to turn him into a vampiric Robin.

Elements of these story appeared in The Batman vs. Dracula and a version of this world is set in the Infinite Crisis game.

Please only list Tropes that are unique to this particular Batman story. Tropes that already apply to Batman, such as The Cowl, don't go here.