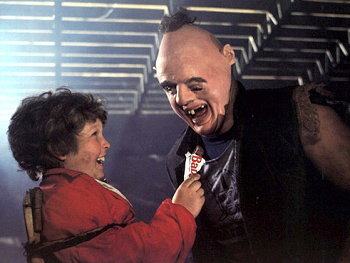 Two characters who come from very different places meet for the first time. They don't speak the same language? They have totally different backgrounds? No matter how different their culture and origins, they will always become friends if they go through an almost ritual exchange of food the first time they meet — doubly so if the food is chocolate-based.

Truth in Television: it's considered good manners in many cultures to offer food to people when you meet them, and sharing bread or salt

created a real bond between people in the olden days. Several languages even have words for "friend" based around the concept of sharing bread (such as the English "companion"). There's actually scientific evidence to back this cultural practice up, as the part of the brain that responds to food is the same part that responds to social interaction.

The trope generally occurs when the hero is in a Fish out of Water situation, and very often when they meet a character whose language they can't understand. After sharing food, the character helps them become familiar with their surroundings.

When a villain tries to invoke this, he may inspire I'm Not Hungry.

Compare Through His Stomach, which typically goes for more than just friendship, and Food as Bribe, which tends to be more practically oriented toward getting someone on your side. Contrast Enemy Eats Your Lunch, for when someone proves their hostility by taking your food. For the romantic side, see Chocolate of Romance.

Chefs can cook up some food for a friend to eat, restoring some HP and building their relationship.

Chefs can cook up some food for a friend to eat, restoring some HP and building their relationship.