Literature / The Cricket in Times Square 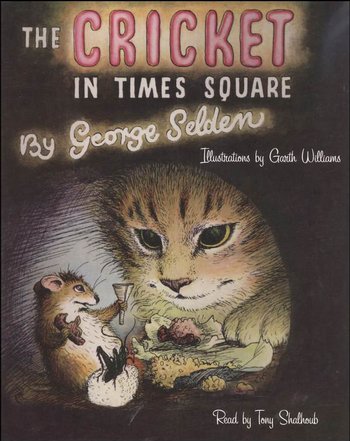 Chester Cricket and his friends.
"Talent is something rare and beautiful and precious, and it must not be allowed to go to waste."
—Tucker Mouse
Advertisement:

The Cricket in Times Square is a 1960 Newbery Honor-winning children's novel by George Selden (with illustrations by Garth Williams) and start of a seven-book series called Chester Cricket and His Friends. It was adapted into an animated short film in 1973, directed by Chuck Jones and starring Mel Blanc as Tucker and Les Tremayne as Chester and Harry. Jones also directed two original sequels — "Yankee Doodle Cricket" and "A Very Merry Cricket".

Chester is a common black cricket living in a stump in a meadow in suburban Connecticut, spending his days foraging, chirping, and communing with the nature he loves. But one day he encounters a family out on a picnic, and his fondness for liverwurst gets him more than he bargained for. He falls asleep inside the picnic basket and is transported miles from his home, eventually jostled out and into the dust and unfamiliar noise of the Times Square Subway Station.

He soon befriends an eccentric cast of characters who help him acclimate to city life, including Mario Bellini, a young boy struggling to keep his family newsstand afloat; Tucker, a brash and streetwise city mouse; Harry, a laid-back tomcat and Tucker's roommate in a drainpipe in the subway station; Sai Fong, a Chinese storerunner; and Mr. Smedley, a music teacher and friend of Mario's parents who recognizes Chester's talent for chirping and encourages him to pursue it to unimagined heights . . .

Tropes appearing in the original novel: