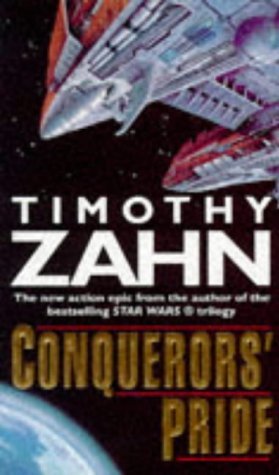 The Conquerors trilogy is a Space Opera novel trilogy by Timothy Zahn about humans encountering a new alien species and, thanks to a botched first contact and some misunderstandings, ending up at war. This may sound rather clichéd, but the usual Zahn skill for twists, Tomato Surprises and more makes it a compelling story.

The three books in the series are:

The titles stem from the fact that the humans, not knowing the name of the hostile aliens, dub them 'the Conquerors'—and the aliens, whose real name is the Zhirrzh, dub humans 'the Conquerors'. After initial skirmishes they're aided in that dubbing by a third species that's had prior contacts with humans and Zhirrzh; that species chips in to tell both sides the others are known as "The Conquerors Without Reason," backed up by the belief—held by both sides, and for once held accurately—that the other shot first. Cue escalation of conflict.

The first novel takes place from the Point of View of an Ace Pilot, Pheylan Cavanaugh, who has been taken prisoner by the Zhirrzh, and the efforts of fellow pilot Adam Quinn to rescue him. The second goes for a twist and is narrated by Cavanaugh's Zhirrzh jailer, Thrr-gilag, providing the first indication that this is not going to be a typical alien-war story. The Zhirrzh have a fully-realized society and some interesting tricks up their sleeve: when they die, if their fsss gland is properly preserved, they essentially become ghosts; these "Elders" form the backbone of Zhirrzh communications infrastructure. The third book switches between Pheylan's and Thrr-gilag's points of view, as well as that of an Artificial Intelligence, as they try to get to the bottom of the situation and see if they can bring the war to a peaceful conclusion...