Literature / The Crying of Lot 49 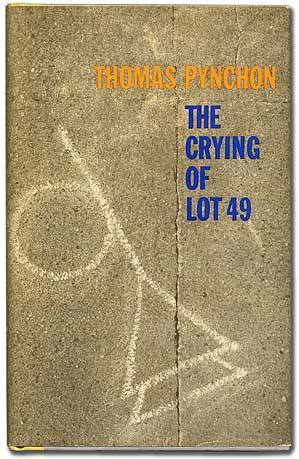 "I came," she said, "hoping you could talk me out of a fantasy."
"Cherish it!" cried Hilarius, fiercely. "What else do any of you have? Hold it tightly by its little tentacle, don't let the Freudians coax it away or the pharmacists poison it out of you. Whatever it is, hold it dear, for when you lose it you go over by that much to the others. You begin to cease to be."
Advertisement:

The Crying of Lot 49 is a 1966 novel (or perhaps novella) by Thomas Pynchon. It is about a woman named Oedipa Maas who unravels the rivalry between two mail distribution companies, Trystero and Thurn und Taxis. Possibly. Or maybe it's an elaborate prank. Or maybe she is actually hallucinating it all.

Though it is significantly shorter than the rest of Pynchon's novels (especially Against the Day and Mason & Dixon), it has become one of Pynchon's most popular books, after Gravity's Rainbow and possibly V. Time magazine included it in its "TIME 100 Best English-language Novels from 1923 to 2005".

Pynchon's style evolve further in Lot 49 after V., which is straightforward and basic in comparison. The novel can also be seen as a bridge between Modernism and Postmodernism, which will be fully engaged in Gravity's Rainbow.

Not to be confused with "Lot No. 249", a Mummy horror story by Sherlock Holmes creator Sir Arthur Conan Doyle.

This novel contains the following tropes