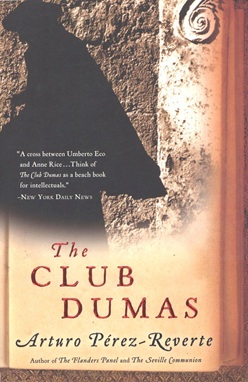 The Club Dumas is a novel by Arturo Pérez-Reverte. It centers around Lucas Corso, an expert on rare books. A client, Varo Borja, asks Corso to authenticate his copy of De Umbrarum Regni Novem Portis (Of the Nine Gates of the Kingdom of Shadows). The book has three copies surviving, due to the rest being consigned to the flames in 1667 along with its author Aristide Torchia—because the book is supposedly an adaptation of another book called the Delomelanicon, co-written by Lucifer himself.

As Corso attempts to figure out which of the three copies is the genuine one, he discovers that the Nine Gates has a purpose—when used correctly, the book will call forth the Devil himself from the depths of Hell and grant the summoner great supernatural power. Corso is not the only person who has figured this out, and is chased by others who want the power and protected by a mysterious girl. The deeper Corso delves into the mystery of the book, the deeper the pile of bodies left behind becomes.

Corso has a second mission which involves "The Anjou Wine", a chapter of the original manuscript of The Three Musketeers by Alexandre Dumas, père. This manuscript was once owned by the late Enrique Taillefer, a millionaire who specialized in cookbooks, who killed himself. While traveling around Europe on his mission(s), he finds himself being stalked by a man and woman who look uncannily like Milady de Winter and Comte de Rochefort.

What do these two strangers want with him and what is the connection between The Three Musketeers and the Devil?

The novel was adapted into the 1999 Roman Polański film The Ninth Gate starring Johnny Depp.