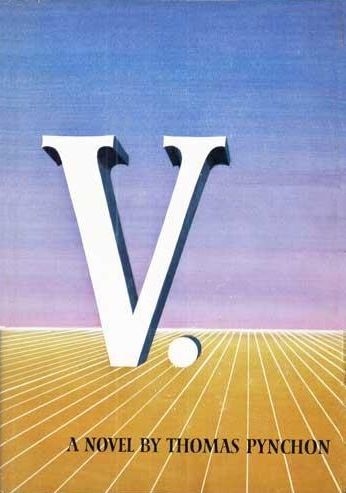 V. is the first novel by Thomas Pynchon, published in 1963.

The novel’s plot is split into two mostly separate plot threads, both of which feature large cast of characters.

The first story is set in late-1950s New York City, and follows a discharged Navy, Benny Profane, hunting giant alligators in the sewers, reconnects with a group of pseudo-bohemian artists and hangers-on known as The Whole Sick Crew, and pines for his devastatingly cool lover, Rachel Owlglass. Among them is his shipmate, Pig Bodine and an artist called Slab, who can’t seem to paint anything else other than cheese danishes.

In Cairo, Florence, Malta, South Africa, and Paris, meanwhile, and at various points across the 19th and 20th centuries, we’re introduced to Herbert Stencil, a mysterious traveler searching for a mysterious woman known only as V. Which may be a code-name, a phantom, a conspiracy, or a dream.

The two threads eventually converge (like a V, y’see) against a backdrop of riotous boozing, Danish-pastry abuse, Orientalist fantasy, wondrous descriptive prose and sobering animadversions on man’s inhumanity to man.

V. had a very different style and is more serious, grounded and a lot less cartoony and/or comedic than his later work. Nevertheless, it contains all of his trademarks, style, themes and ideas that will haunt his future work.

Life’s single lesson: that there is more accident to it than a man can ever admit to in a lifetime and stay sane.