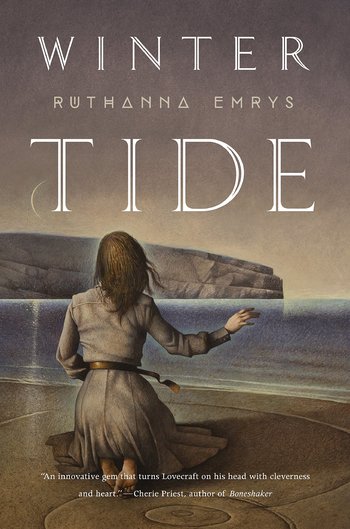 The Litany of Earth.
Advertisement:

The Innsmouth Legacy by Ruthanna Emrys is a Deconstruction of and sequel to The Shadow Over Innsmouth by H. P. Lovecraft. The premise is the Deep Ones of Innsmouth, Massachusetts were actually a deeply spiritual and peaceful people rather than the depraved cultists in the novella. Aphra Marsh is one of the two surviving Deep One hybrids from the original Innsmouth Raid, having spent her formative years in United States concentration camps (that would eventually be used for the internment of Japanese citizens during WW2). Understandably bitter about her experience, she's become assistant to an occult bookstore owner in San Fransisco and lives there with a Japanese family.

FBI Agent Ron Spector approaches her one day and reveals the US government has "changed" and wants her help in dealing with supernatural threats. Nonplussed by the audacity of the request, she is soon persuaded due to the number of people put in danger by tampering with forces they do not understand. While the Cthulhu Mythos is Lighter and Softer here, it is not exactly "safe" either.

The ''Litany of Earth'' is available for free from Tor's website.

open/close all folders
Series
"There are two ways to write fantastic oppression. One uses the imagined oppression to stand in for real experiences. You can tell powerful stories that way, but it can also make the real thing invisible, or twist the truth in strange ways. I love the X-Men, but if someone can kill you by accidentally dropping their glasses, it actually does have different legal and societal implications than if they’re gay or Jewish. My single favorite moment in X-Men is a confrontation between Magneto and Kitty Pryde, both Jewish, that engages with the intersection of real and imagined oppression. It lets the imagined one have its own nature rather than trying to stand in for something else. That’s what I’m interested in doing with Aphra’s stories. What looks the same about hatred or internment, no matter who and what you are? What changes when there’s real magic involved? What happens when you get Jews and Nikkei and Deep Ones together in a room after World War II—what do they have in common, what’s different, what can they learn from that parallax?"
—Ruthanna Emrys
The Litany of Earth
Advertisement:
Winter Tide
Deep Roots