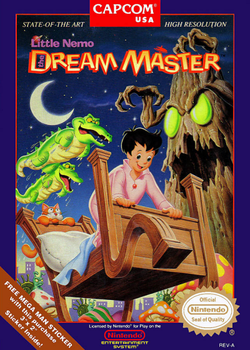 A 1990 Platform Game by Capcom for the Nintendo Entertainment System, based on the anime movie Little Nemo: Adventures in Slumberland (based in turn on the classic comic strip Little Nemo by Winsor McCay).

Nemo is invited by a messenger (the Candy Kid/Bon Bon, though not identified in game) to Slumberland to be the Princess's playmate. Armed with an infinite supply of candy to tame creatures with, he sets out into Dream Land.

When Nemo finally meets Princess Camille, she tells him to rescue her father, Morpheus, who has been kidnapped by the evil King of Nightmares.