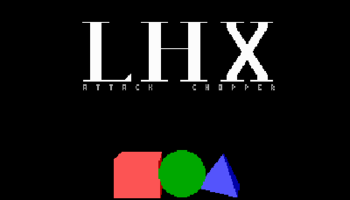 LHX Attack Chopper is a helicopter Flight Simulator released in 1990 for the PC based on the Light Helicopter Experiment from the 1980s, but would later get ported to the Sega Mega Drive amongst other consoles.

The player is a pilot in the US Army Air Cavalry and can select one of four helicopters as well as a specific loadout to undertake a wide range of missions in three theatres of war (Libya, Southeast Asia and Central Europe). Known for its Nintendo Hard difficulty, Copy Protection measure and player character profiles that are deleted if the player should die.

The player is able to attain medals and higher ranks upon scoring certain amounts of points over the course of missions and can select any mission from the get go.