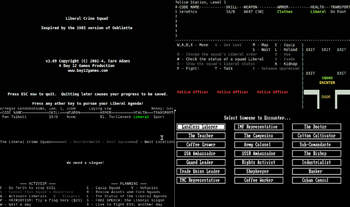 Title screen, and some of the things you can do in the game.
Advertisement:

WARNING: The scope of this game is narrower than that of real life. We have attempted to include foul language, graphic violence, politics, religion, sexual references, adult situations, narcotics, prostitution, bodily functions and bad pickup lines , but Bay 12 Games recognizes that there might be omissions which will make some players uncomfortable. In light of these facts, use your discretion when making decisions about downloading LCS.note Although, considering just how outright 'horrible' those pickup lines and their responses are...

Liberal Crime Squad is a freeware game made by Tarn Adams. Tarn began work on it in 2002, and ceased development soon after publishing the first stable version in 2004. However, in mid-2007 the Liberal Cause was taken up once again by Jonathan S. Fox, and some other forum regulars at Bay 12 Games.

Picture a world where Political Cartoons are the truth — now, imagine that world erupting into civil war.

As the name implies, LCS is a game about committing crimes in the name of the Liberal Cause (we need a slogan!), in the interests of making the world a freer and more tolerant place. Along the way, your noble cause will be opposed by many, including the police, extreme conservatives, and the nefarious Conservative Crime Squad (we also need a slogan!), who just want everyone to be safe and happy... under the iron fist of a fascist government!

You and your liberal squadmates 'win' when your state's laws and regulations are rated L+ (Elite liberal) and the Government is Elite Liberal as well, and lose if the conservatives persuade those politicians to see things their way, and create a fascist police state (C+) where Reagan is god. Don't let that happen!

There are a number of ways to persuade the people in power to see things liberally. First of all, you can free sweatshop workers and destroy the machinery to cut into the conservatives' budget. You can also make T-shirts for fun and profit, and also to spread your liberal word far and wide. You can also kidnap and brainwash numerous people, causing them to become 'sleepers' within their respective jobs, fighting for the liberal cause from the inside. You can, of course, also steal cars and cash to get around and to lubricate interactions with others, as these will become important parts of furthering the liberal cause as you progress.

In addition to its political roots, the game was originally created as a parody-slash-homage to Oubliette

, an obscure 1983 computer RPG with similar core party, exploration, and combat mechanics; however, LCS took on a life of its own and grew from there.

The last 'official' release can still be downloaded

, and the latest open-source version can be found here

. A port for Android can be found here

. The wiki can be found here

. The Github version, which still continues to be updated and adds new features such as Augmentations and multiple save files, can be found here.