Literature / The Power of Five 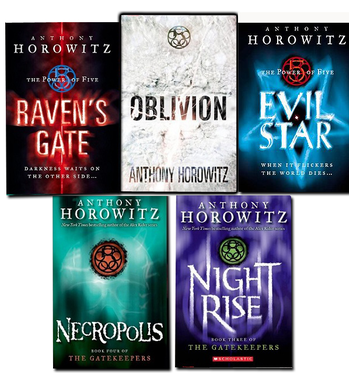 The Power of Fivenote Gatekeepers in the US is a supernatural thriller series by Anthony Horowitz, author of the New York Times best-selling Alex Rider series. This is in fact a rewrite of his unfinished Pentagram series from the 1980, consisting in five books:

The story focuses on five 14-year-olds (Matt Freeman, Pedro, Jamie and Scott Tyler, and Scarlett) who are the reincarnations of five beings who saved the world from the Old Ones, ancient incarnations of evil who once ruled the world, by sealing them away into a hellish dimension only accessible in certain parts of the world. Unfortunately, a evil organization wishes to unlock those parts to release the Old Ones onto the world once more and become rulers of the world. Now it is up to Matt, Pedro, Jamie, Scott and Scarlet to prevent the world from falling into darkness once more.

Raven's Gate: Matt Freeman is sent to a nice village after being arrested for stealing from a warehouse as part of a government program. However, things are not as they seem as a series of strange events leave him in strange danger. He cannot escape, he cannot contact anyone, and the roads out of the town loop. Along with a journalist called Richard Cole he meets, he discovers the townspeople are trying to unleash the Old Ones. Oh, and Matt finds out he is destined to save the world with his newfound telekinetic powers. Eventually they win. The novel as a whole seems inspired by Lovecraft and is essentially a fantasy horror story.

Evil Star: Matt and Richard travel to Peru to find the next of the Five. Richard is kidnapped. Matt meets a boy called Pedro who winds up being one of the Five. They find a lost city and try to foil a convoluted plot to bring back the Old Ones using a satellite. This book has a more fantasy themed plot.

Nightrise: This book focuses on Jamie and Scott, telepathic twins who work at a playhouse in Reno, Nevada. One night, they are attacked by mysterious assailants. Jamie manages to get away, but Scott isn't so lucky. The former is saved by Alicia McGuire, an aid for a presidential candidate named John Trelawney, who needs Jamie to help her get her son back from prison. With a common goal, the two go to free their lost loved ones from prison, while the reader begins to learn about what life was like when the Old Ones ruled. This is the first book not to focus on Matt, although he does cameo in the ending.

Necropolis: Scarlett is introduced here after being teased in the Nightrise. Scarlett goes on a school trip to an ancient English church for her art class. It is there that she sees an apparition of Matt pass through an unusual door at the end of the hall. She follows him, only to find herself in Ukraine and in the hands of a satanic cult called the Monastery for the Cry for Mercy. She manages to escape, only to be plastered all over the news and revealed to the Nightrise organization, forcing her to head to Hong Kong to figure out Necropolis actually is. Meanwhile, the rest of the Five plan to save her when tragedy strikes, forcing Matt and Jamie to split up from Scott and Pedro and head to England.

Oblivion: Ten years after the events of Necropolis, the Five are once again separated from one another due to the destruction of the magical door as they were using it. Matt and Lohan are in Brazil, Richard and Scarlett are in Egypt, Jamie is trapped in a closed-off village in England, and Pedro and Scott are captured in Italy, where the Old Ones try to tempt Scott into joining them. The last dregs of humanity are gathering in Antarctica, preparing for the final battle against the Old Ones in the desolate land of Oblivion. But Matt has read his own book in the Library, and he knows that this ending may not necessarily be a happy one...