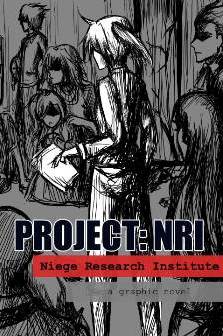 " is an illustrated light novel posted on Tumblr. It was conceptualized in 2013, with the first print chapters and online chapters posted in February 2014. Project NRI started as spinoff from Danganronpa, but has since grown into its own story.

It follows the story of math-hating mathematical genius Yamagi Noriko, while trapped in the Niege Research Institute with 15 other people. After waking up from cryogenic sleep, they are informed that in order to leave NRI alive, they have to kill someone without getting caught. If the quota of five murders isn't reached within four months, the institute director, a robotic owl named Owlfred, promises to blow the place up with everyone inside.

The online novel is updated per chapter.