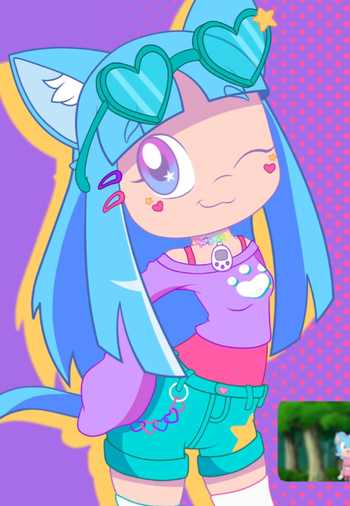 Her Author Avatar.
Courtney, better known by her online handle, Project SNT, is an artist/Youtuber who makes videos. She has two notable series on her channel:
Advertisement:

The first is SNT Comics, in which she reviews her old comics about Sonic the Hedgehog and her fan character, SNT. The first was hand-drawn, and the rest were Sprite Comics.

Her other main series is Sylveon Trolls Everyone, where Sylveon roasts various Pokemon, their Alolan variants, their original Gen 1 sprites, their Shiny forms, Yo-Kais, Digimon, Super Smash Bros. Ultimate characters, and even her fans. Sylveon is also known for her hatred of Lucario.

Tropes about her channel in general

Tropes about the SNT Comic series

Tropes about the Sylveon Trolls series