Film / The Miracle of Morgan's Creek 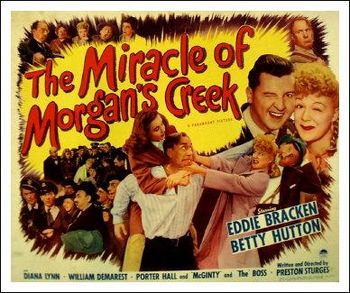 Governor McGinty: This is the biggest thing to happen to this state since we stole it from the Indians!
The Boss: Borrowed.
Advertisement:

The Miracle of Morgan's Creek is a 1944 Screwball Comedy from Preston Sturges, set during World War II.

Trudy Kockenlocker (Betty Hutton), the daughter of the town constable (William Demarest), sneaks out against her father's wishes to a dance for the soldiers, using a date with Norval Jones (Eddie Bracken) as an excuse. She doesn't really remember what happens that night, except she thinks she got married to a soldier (named, or so she thinks, "Ratzkywatzky"). Later, she finds out, as a result of that night, she's pregnant, and her younger sister Emmy (Diana Lynn) convinces her to trick Norval into marrying her. She can't bring herself to do it, especially when she sees how Norval reacts to it, but Norval ends up wanting to marry her anyway. Because this is a Preston Sturges film, Hilarity Ensues.

Despite the fact this film's release was delayed for nearly two years due to censorship issues with The Hays Code, it remains one of the most adroit examples of censorship subversion ever made.

(phone rings)
(Norval has a seizure)