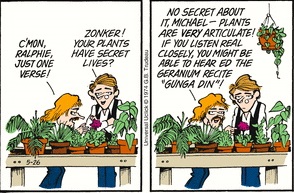 Husband: [shouting into yard] Oh, why don't you GROW UP, you little bastards! [slams window]
Wife: What's going on, darling?
Husband: Nothing, I'm just talking to the plants.
— Not the Nine O'Clock News
Advertisement:

Many gardeners claim that talking to plants helps them grow faster.

People talking to their plants in fiction is often used to show how boring they are. A common shtick, especially in cartoons, is for the plant to die of boredom as a result. Leaving jokes aside, this is often done by characters who are feeling lonely or secretive and instead of just speaking to themselves choose to project their thoughts to another living thing.

Oddly it's truth in television, as plants require carbon dioxide for photosynthesis, which humans and other animals exhale. The act of talking to the plant can also help the human in question forge an emotional bond to it, which tends to result in said human paying more attention to and taking better care of said plant.

Less commonly, they talk back, usually in ways that cannot be translated into words as The Empath can see or perhaps feel things from their point of view and through their senses.