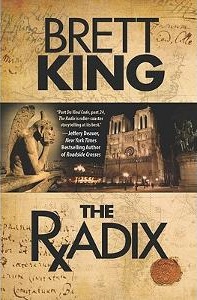 The Radix is a 2010 mystery novel by Brett King. The eponymous Radix is an ancient plant that holds miraculous healing powers and may even be able to grant immortality. It belonged to Jesus Christ, later it was sought by Vatican, Knights Hospitaller and the Borgia family. In the sixteenth century it disappeared.

Now it has been found again, thanks to a genius (though insane) cryptographist Edgar Wurm, who found clues by decrypting the Voynich manuscript. Adventurer Paleopathologist John Brynstone retrieves the relic, and the chase for it starts again, including the Knights of Malta, modern Borgias, the US government and Taft-Ryder Pharmaceuticals.However, the Radix itself is just a half of the miracle: to manifest its true power one needs the "Scintilla", the recipe for the elixir. It is long lost too, and the last person to know its whereabouts was Carl Gustav Jung, whose castle still keeps clues, if one knows how to find them.

The book features a lot of action, chasing and shooting as well as elaborate lectures in history, mythology and cryptography.

Not to be confused with the videogame Radix: Beyond The Void.