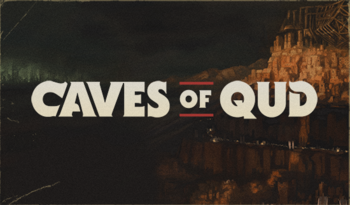 Caves of Qud is a post-apocalyptic Science Fantasy roguelike game developed by Freehold Games, heavily influenced by ADOM and the Gamma World RPG. Set on a future world many centuries after an undefined apocalypse, the game places you in the titular region of Qud, a jungle-like area bordered by a desert of salt and large mountain ranges, and boasting a large number of ancient ruins. This realm is actually a terrible place to live, but still attracts many adventurers due to the abundance of Lost Technology within its borders, particularly within its vast cavern systems. However, things may be taking a turn for the (even) worse, as signs of an ancient evil begin to emerge from the dark and forgotten Caves of Qud...
Advertisement:

The game is still in active development, has been released available on Steam Early Access in 2015, which can be played here.