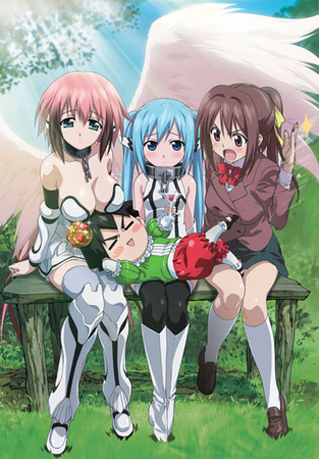 Marshmallow Hell + Luminescent Blush + Tsundere + Super-Deformed = Heaven's not getting it back! note  From left to right; Ikaros, Nymph, and Sohara, with Tomoki on their laps.
Your Wish Is Her Desire
Advertisement:

In a quiet little town surrounded by the mountains, Tomoki Sakurai lives a peaceful life with his somewhat Megaton Karate Chop-prone childhood friend waking him up in the morning. That, and the recurring dream of a girl in the sky. At the same time, school eccentric Eishirou Sugata has been witnessing an unidentified thing moving above the Earth, with nobody able to figure it out. Through a series of circumstances, Tomoki ends up being the only one around when the thing falls to Earth near his hometown. In it is a girl in skimpy clothing with angel wings, calling herself an Angeloid. Her name is Ikaros. Things just got a lot more interesting... whether our hero likes it or not.

Heaven's Lost Property is a fantasy harem manga created by Suu Minazuki (who previously wrote Watashi No Messiah Sama) which ran in Monthly Shonen Ace from 2007 to 2014. It was adapted to two anime seasons and two movie releases. The anime's first season aired in the fall of 2009, and the second, Heaven's Lost Property forte, in fall 2010. The first movie, The Angeloid of Clockwork (about half Compilation Movie), was released June 25, 2011, with the sequel Eternal My Master, released on April 26, 2014.

Funimation has licensed the first two seasons of the anime and the movie. You can also find the series on Hulu.