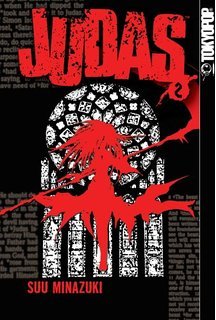 Judas is a manga by Suu Minazuki, which ran in Monthly Shonen Ace from 2004 to 2006. The first two volumes were released in English by Tokyopop; after Tokyopop's shutdown, the license was rescued by Viz Media.

Judas, the spirit of death, is cursed for his sins and must reap 666 souls in order to get back his human body. Problem is, he's an Intangible Man, thus can't actually kill anyone. Thus he takes Eve, a feminine young boy, and possesses him to use his death powers and reap souls... Except it seems to get plenty sidetracked by people who are obsessed with 'Eden', and the inhumane acts they commit to find it...

Tropes associated with this manga: