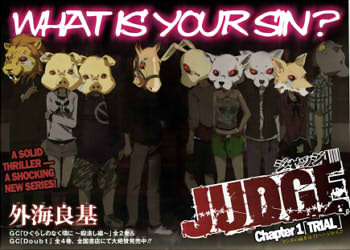 If you haven't figured it out by now, the author has a thing for bunnies.
If you don't want to die, then point your finger at an animal that you think committed a worse crime than you.
Advertisement:

Following the same principles as Doubt, Judge is a horror manga written by Tonogai Yoshiki. It was serialized in Monthly Shonen Gangan from 2010 to 2012.

Hiro is an Ordinary High-School Student who once had a secret crush on his childhood friend Hikari... except she was already dating his older brother Atsuya. One day, Hiro manipulated Atsuya's schedule so that he would have a chance to confess his feelings, a decision that had grave consequences when Atsuya is killed in a freak hit-and-run.

Two years later, Hiro is attacked by an unknown assailant and wakes up in a barren cell, his hands tied and a grotesque mask covering his face. He soon discovers that he, along with eight others, have been trapped within a ruined courthouse and forced to play a game called "Judge". All nine players are guilty of some grievous sin in their past, and every twelve hours they must vote to execute one of their own until only four remain.

Will the players find a way to work together until an escape route is found? Who can be trusted in a game where a single vote can be the difference between life and death? And just who or what is responsible for setting up this twisted game in the first place?

adaptation was released on November 2013. You can check out the first trailer here