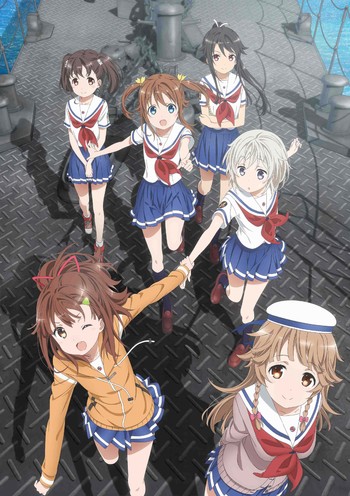 "Comrades at sea are all family"
Advertisement:

A century after mining triggers a tectonic disaster submerging much of Japan, the nation has since recovered and thrived, constructing massive ocean-borne settlements along coastal areas. These cities are safeguarded by the Blue Mermaids, an elite, all-female organisation whose members have dedicated their lives towards the defense of ocean routes and civilian populations living along the coast. When she was younger, Akeno Misaki made a promise with her best friend, Moeka China, to join the renowned Blue Mermaids.

Years later, Akeno is admitted to Yokosuka Girls' Marine High School, where she is reunited with Moeka and assigned to be the captain for the destroyer Harekaze. On her maiden voyage, however, Akeno and her crew come under fire from their instructor, and inadvertently become accused of mutiny. Finding themselves wanted fugitives, Akeno and her crew must rally to survive, and in the process, each member of the crew turn to their unique skills in order to help Akeno and the Harekaze navigate difficult waters, overcoming obstacles on the way to discover the cause of these events and all the while, working hard to become full-fledged members of the Blue Mermaids.

High School Fleet (ハイスクール・フリート), also known as Hai-Furi! (はいふり), is an Anime First series by Production IMS that aired during the Spring 2016 Anime season. The anime features character designs by Atto (who previously worked on Non Non Biyori), and ship designs and CGI by Graphinica, as well as members of the staff who were involved in Girls und Panzer's production. In 2017, two OVAs were released, following Kouko Nosa's perspective in the aftermath of the TV series. A sequel movie with a new plot premiered in Japan in January 2020.