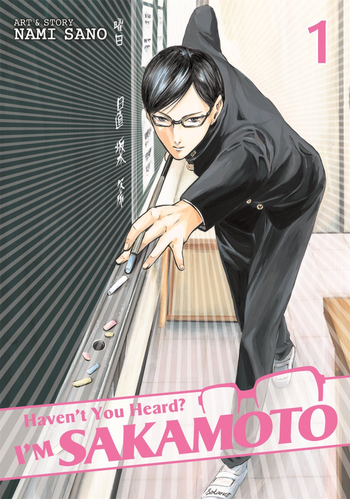 Say... have you heard about Sakamoto?

He's a new first year at Gakubun High School, but more importantly he is cool, cooler, COOLEST! His every motion is filled with grace enough for a dozen Bishounen characters. He's soft-spoken yet filled to the brim with confidence, and never hesitates to help those in need. It's no wonder that after starting school, he became the center of attention. The girls love him, but the boys admire and hate him for it, often plotting to prove he is not all he seems.

However, no matter what tricks the other boys try to play on him, Sakamoto always manages to foil them with ease, moving through his high school life with confidence and class like no other.

Haven't you heard? I'm Sakamoto (坂本ですが？ Sakamoto desu ga?) is a comedy manga series and debuting work of Sano Nami, which started serialization in 2011 and concluded in 2015.

In 2016, Studio DEEN produced an Animated Adaptation, which debuted in April.

This series provides the Cool, Cooler, COOLEST examples of:

While looking through pictures taken during the class's beach trip, the girls find a photo of Sakamoto.

Example of:
The Burlesque of Venus

While looking through pictures taken during the class's beach trip, the girls find a photo of Sakamoto.